Reconstruction has been a part of the Jackson County Sheriff's Office since the 1978. The primary purpose is to determine how a collision occurred using the physical facts, witness statements and evidence available at the crash scene. Prevention, Prosecution and Education are three of the several reasons why a detailed investigation of a traffic crash needs to be conducted. Prevention, to reduce the possibility of future traffic incidents. Prosecution, to hold the driver accountable for those violations in a criminal court. Education, to educate drivers and integrate the preventative enforcement measures already in place.

All members of the Jackson County Sheriff's Office Traffic Unit receive extensive training in accident investigation and reconstruction. This training involves hundreds of hours to become a skilled traffic accident investigator. This training provides in-depth coverage to systematically investigate a traffic accident, including the ability to recognize critical evidence at the scene, and to preserve and record it promptly. Techniques for recognizing and properly recording the accident results on roadways and vehicles. Data collected at the accident scene is useful only if properly interpreted and analyzed, and sufficient to explain events relating to the accident.

All fatal and serious motor vehicle crashes require that comprehensive and complete investigations be completed to determine how the crash occurred. Scale diagrams of the crash scene must be prepared to record final rest positions of vehicles, roadway characteristics, and items considered potential evidence identifying the cause of the crash. One of the major time-consuming tasks in the investigation and processing of a serious crash scene is the measurement and recording of data from the crash scene to prepare a scale diagram. Currently, crash scene measurements are taken using physical measuring devices, such as 100-foot fiberglass tapes, LASAR radar measuring devices and measurement wheels.

These measuring devices are often difficult to work with due to wind and other weather conditions and require repetitive time-consuming actions that place the investigating officers within and around traffic lanes while measurements are being recorded. In some cases, to expedite traffic delays, vehicles pass through the area of the crash at the time measurements are taken with the officer near the traffic flow. By reducing the time expended "on-scene" locating and recording these measurements, there will be an associated reduction in total traffic delays, secondary crashes, and fewer officer and citizen injuries. In the near future Jackson County Sheriff's Office members will be trained and equipped with the Forensic Mapping System.

The Forensic Mapping System (FMS) consists of a total station, data collector, map software, Computer Aided Drawing (CAD) software, and a laptop computer. FMS uses electronic total station measuring devices (the same devices used by surveyors) to take measurements electronically, record the data automatically, and store it in the data collector. The data collected is then downloaded to the laptop computer into the map software where the data points are plotted by code, which is entered for each data point by the operator. The nearly complete drawing is then downloaded into the CAD software and the drawing is completed. Once the drawing is completed, analysis of the crash can begin. The total station is a combination of an Electronic Distance Measuring Instrument (EDMI) and a theodolite (a surveying instrument used to measure horizontal and vertical angles). The total station can be set up off the roadway. Evidence is located by an investigator holding a pole with a prism over a location of evidence. The instrument is focused on the prism and the operator takes a "shot" by pressing a button on the data collector. An infrared beam is emitted at the prism and is reflected back to the instrument. The operator then enters a code for the specific "shot," the investigator with the pole moves to another evidence location, and the process continues. The data collector records the distance, angle, and elevation for each "shot." 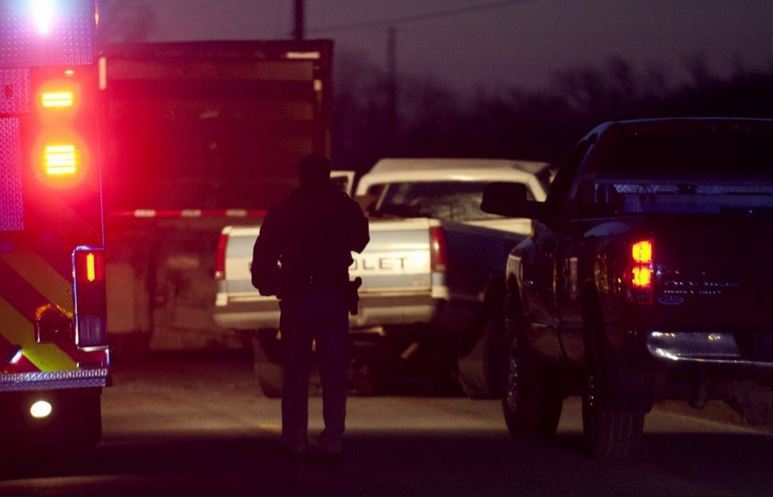