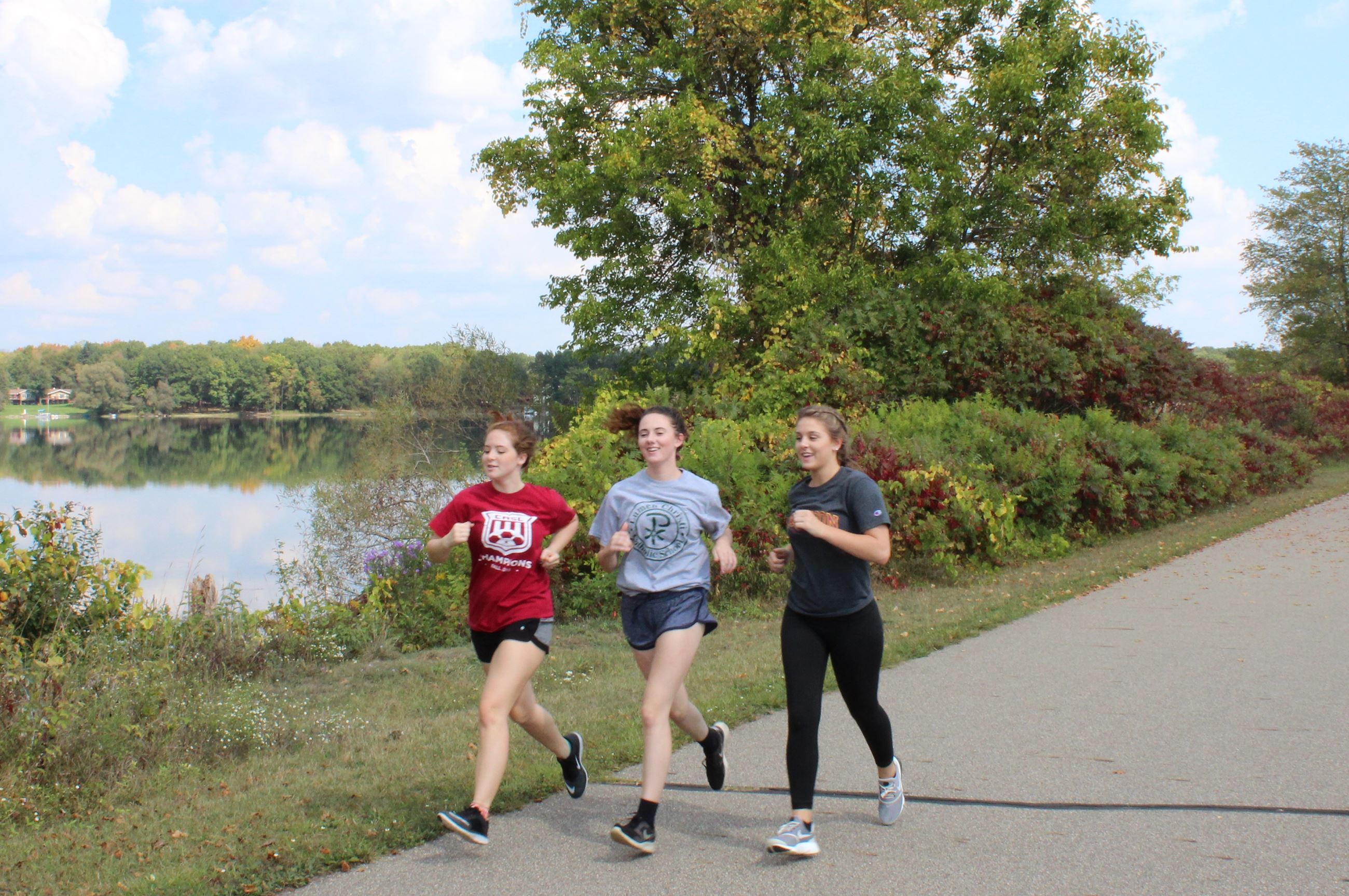 
One of Michigan's most popular rail-trail destinations!


Connecting the Village of Concord with the City of Jackson, the trail was built on an abandoned stretch of the Michigan Central Railroad. The 10.5-mile, 12-foot-wide paved trail is ideal for walking, running, or biking. As it travels through natural springs and lakes that form the headwaters of four major Michigan rivers.

At the western trailhead in Concord, the trail crosses over the Kalamazoo River where you can view a great expanse of wetlands filled with abundant wildlife. At the mid-point of the trail, stop, relax, and enjoy the natural beauty of the picturesque Lime Lake. This is a trail you will want to visit time and time again to experience the seasonal changes in scenery.

The Michigan Air Line railroad was completed in 1871, although Snyder Station at Moscow Rd. existed in 1867 and became a busy rural shipping point with four passenger trains and up to 40 freight trains every 24 hours. There was also a depot at Lime Lake with a ticket agent in 1903 as well as one in Concord. The railroad continued in 1884 across Michigan from Niles, east through Jackson on to Romeo, and on into southern Canada. In the 1970s Conrail abandoned the line and tore up the tracks.

Our Trail’s Economic and Sociological History

Douglass Houghton, Michigan Territory geologist of the early 1800s, described the area of the Falling Waters Trail from Jackson to Spring Arbor as “rolling filled with marshes, lakes and cat-holes;” and “filled with numerous springs of peculiar character that seem to contain minerals and extensive beds of marl” near our Lime Lake’s well known Peppermint Springs; and “beautiful oak openings with primary boulders” proceeding further on to the lovely site of Concord.

Lime Lake was originally only a four-acre pond called Bateman Lake on Carter Road from which Methodist Episcopal Church Seminary students cut ice. The Portland Cement Company dug marl with two large steam dredges from 1900 to 1929, forming the lake into its current size, split by the railroad tracks. The remnants of docks and equipment are visible to trail visitors in the bottom of crystal clear south Lime Lake.

The first dam built in Concord, then called Van Fossenville, was constructed in 1833 near the Falling Waters Trail on the north branch of the Kalamazoo River. The saw mill equipment was installed in 1835, west of the railroad bridge on Concord’s main street. Waterpower from the
Kalamazoo River was important to the development of the village and area.

In 1833, David Trumbull wrote his father in Connecticut about bears, wolves, prairie hens, and plentiful turkeys and deer in the area. The Trail area is still filled with wildlife, though the bears and prairie chicken booming ground have been replaced with coyotes.

The Lime Lake Fen was studied in 1984 by Cranbrook Institute of Science and Spring Arbor College Biology Department. Prairie Drop seed, on the Michigan list of endangered plants, is found along the southeast shore of Lime Lake, as is Giant Sunflower, Big Bluestem, Giant Lobelia, and the delicate blue Fringed Gentian.